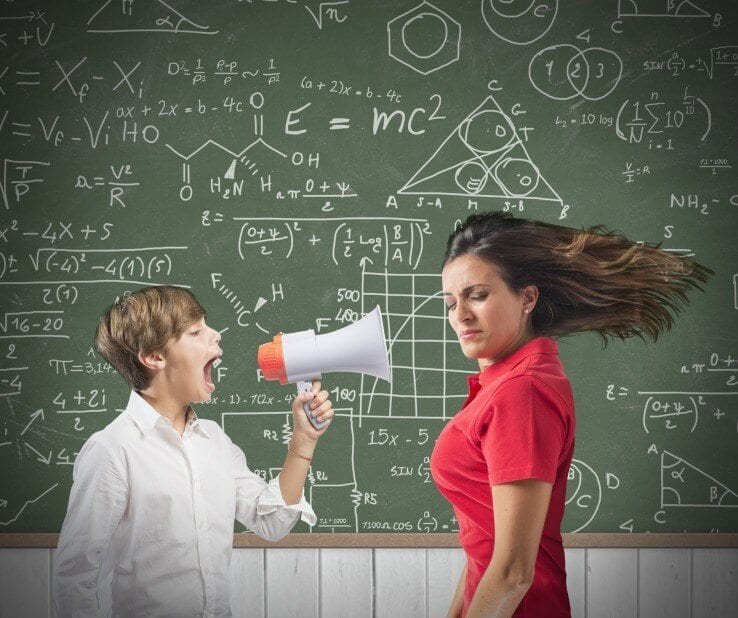 The advantages of swimming for children with ADHD

Why aren’t you doing well?

Why can’t you do the things other kids can?

As a young boy with ADHD I was scolded all the time when I should have been encouraged. My confidence and my self-esteem were depressed so much that I didn’t want to respond or talk, and I was sure I was a complete idiot.

Why aren’t you listening?

When I was 12 years old I used to scribble on a piece of paper during classes. It helped me focus on what the teacher was saying. When the teacher dictated I would write two lines, space out, leave a few blank lines and then write another line, and so on. When everyone else wrote 30 lines’ I wrote 6. The teacher, who saw me scribbling while spacing out, sent me out of the classroom to think about what I’ve done, namely not listening. I understood from what she said that I was stupid, retarded, an idiot, and did not return to class that day.

That teacher could have said to me: “Ori, you are amazing! Good job writing those two lines. Do you think you can write four tomorrow?” Given this incentive, I would have surely succeeded. An empowering experience in front of a group can get the brain to focus double its usual capacity, and not seal itself off.

Parents, teachers, guides – don’t hurt the feelings of children with ADHD. It’s like telling a kid who’s week at sports: “Why are you so week?” or “you really can’t run!”

An ADHD kid knows he has a problem. You don’t have to repeat it over and over again. None of us want our shortcomings rubbed in our face time after time. I realized this only after years of therapy and dealing with the difficulty I experienced as a child, alongside teaching and treating kids with ADHD and other difficulties.

The water is an amazing dimension for kids with ADHD – the quiet in they are not told what to do, the breathing that improves to create some form of meditation, the ability to let out the stress and frustration of someone who’s being scolded all the time, the ability to be successful, and more. 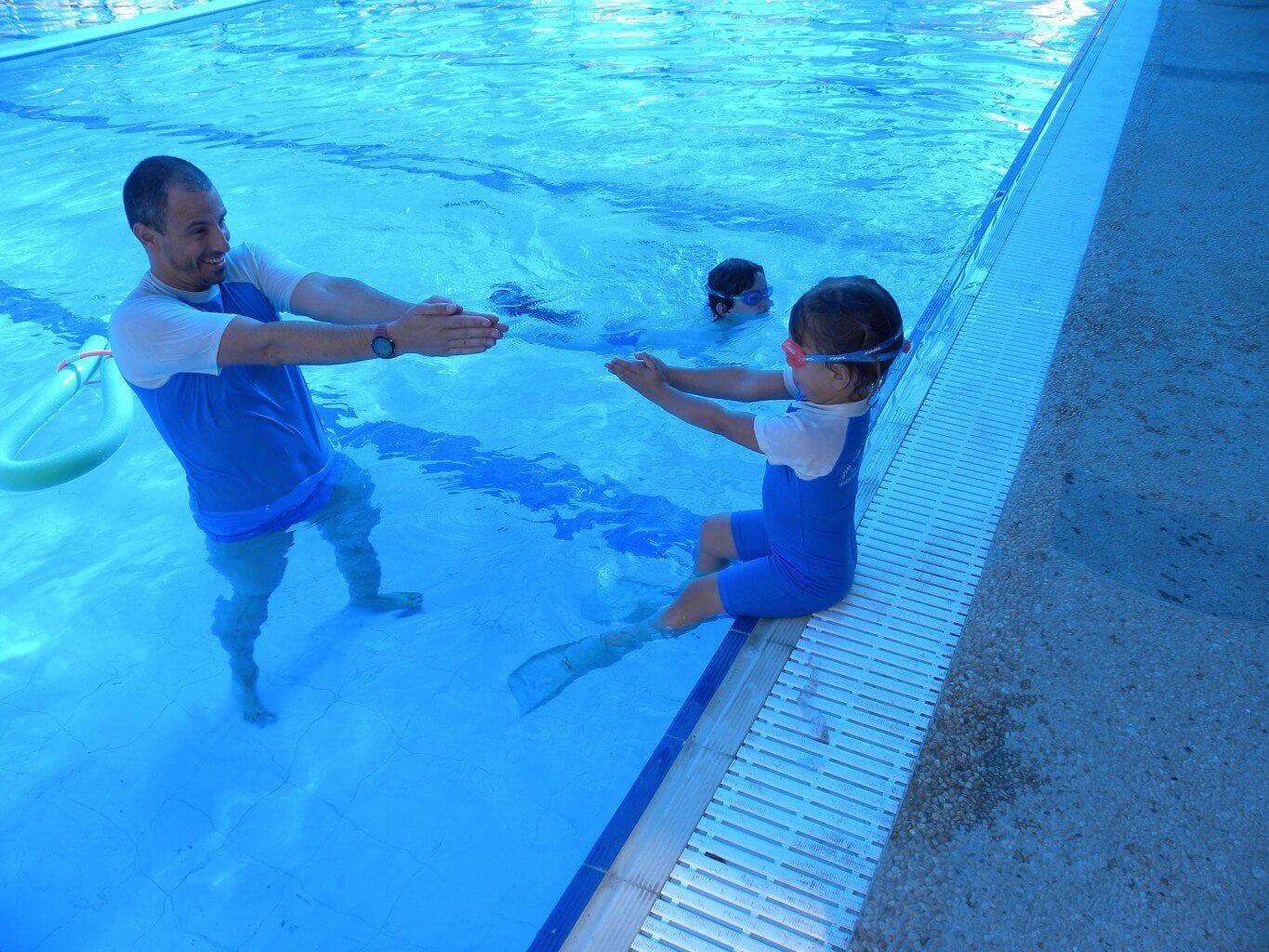 Attention span diagnosis in the water

In the diagnostic stage, a professional trainer checks the child’s attention limits, and the child’s strength and coordination. For example, he would have the child sit on the pool’s edge and make circles with his arms. A child who has difficulty concentrating would not be able to make 20 circles sitting down. He would relax his hands, want to jump in the water, slip into the pool inadvertently etc. Our goal in this diagnosis is to test the limits of attention, and when the child reaches it – change the exercise. Slowly we stretch the limit of concentration so that the child can perform more complex exercises for a longer period of time, according to measurable goals that we define.

Water relaxes the brain and restarts it

Water is magic. The hydrostatic pressure, which is the pressure on the body and the head, gently massages the head when we move in the water. When we concentrate and think for a long time the brain heats up. Try to imagine a car without a water cooling system – the car would heat up right away and the engine might explode. The water has an amazing ability to relax and cool down the head and create a sort of restart within a short period of time. In addition, rolling in the water creates a movement of the brain, getting out of balance and finding new balance. The movement of the head through the water, the hydrostatic pressure that changes according to the depth of the water and the diving and flipping in the water can make a child who completely lost his attention to restart and forget that he was on the edge. Slowly the amount of interim play diminishes, and the child focuses on one task for a longer period of time than he used to – twice or even five times as long. 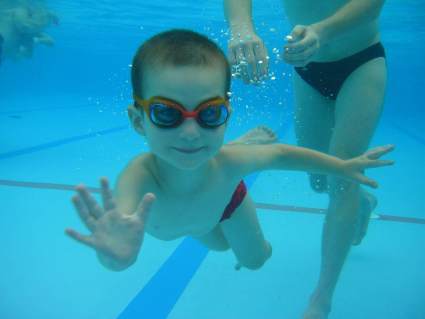 The effect of the lungs and shoulders on attention

The air contains 21% Oxygen. The more Oxygen gets to the brain, the more concentrated we are, and for a longer time, without getting tired. An amazing example is the casino, where they enrich the air to make people gamble for a longer period of time without getting tired. Rumor is that in the Beijing Olympic Games the Chinese infused the air in the swimming pools with Oxygen to make them the Olympic Games with the most world records, and indeed it was.

The hydrostatic pressure puts pressure the lungs, making them work 60% more than on land. While swimming, the pressure is even greater, causing the lungs to work 200% more than while engaging in aerobic exercises such as running, biking etc.

In addition to enlarging the lunge capacity by 20%, we can improve lunge output, meaning we can enlarge the energy flow from the lungs to the brain and the muscles. Swimmers can get to lung output of 60% more than the ordinary human. Taking into account the enlargement of both lung capacity and lung output, a child who has been swimming for a few years can enlarge the amount of Oxygen he gets by 190%. Yes, almost double what the brain needs to create attention.

The Olympic swimmer Michael Phelps, who was given both medication and a behavioral treatment for his ADHD, stopped taking his medication completely when he was 11 years old. The amount of daily exercises was so great, and every exercise so meaningful, that his concentration lasted for 1-1.5 hours after each one.

The kid must let out energy

By the time I was 10 I was injured in every conceivable way. I had over 100 stitches all over my body. I was lucky my mother was a nurse, so I didn’t always have to go to the hospital.

It sounds funny, but it isn’t. Children with Attention Deficit Disorders, and especially hyperactive children, must let out energy, and if so – why not in the water? Water can regulate the energy and channel it to success and honing movement skills.

Why is it so important to swim before a test?

To understand this a little more you can watch Dana Wise’s T.V. show – “A country under diagnosis”, where they took a group of kids who underwent a swimming practice, and a group of kids who had been playing computer games. The experiment clearly showed that the group of swimmers did better than the other group.

A fun exercise in the water to improve attention

One of the easy exercises that parents can do with their children in the water is catching objects in the water. You throw plastic hoops, dolphins or sticks to an area that is easy for them to reach and have them retrieve the objects. Then you gradually throw them further and further away while teasing them: “I bet you can’t reach it…”

Together with the teasing, it is very important to generate success. It’s highly recommended to make this a fun game and not an exercise, and so, while playing, you can get the child to stay in the water longer with aerobic work or without breathing, to enlarge lunge capacity, and to strengthen the shoulders and the whole body.

The object of this exercise is to make the water fun while performing one of the most important exercises to improve attention.

There’s no such thing as too many “good job”s. if a child is having a hard time, he can perform an easy exercise, like throwing a foam ball, in front of a large group, and get a “good job”. The compliments will make him want to succeed and stretch his attention limits more and more.

The main objective of working in the water is to get a child to have fun on the one hand, while challenging him on the other, to strengthen the immune system, strength and confidence, so he will be better equipped to deal with challenges in the future.

When I was young, I thought I was an idiot. I came to understand that I need to swim in order to let out my energy and to focus. From a scared, shy kid with low self-esteem I turned to an adult that understands his own difficulties and can get very far in sports, in business and in life.

Owner of “Water World” centers for swimming and hydrotherapy,