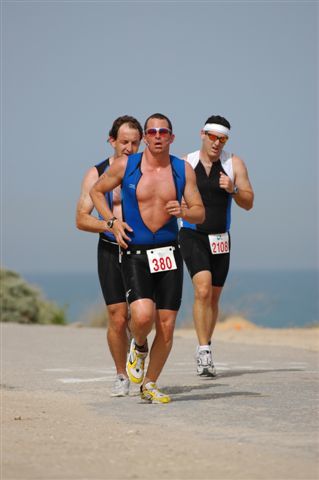 Ori Sela learned many things about triathlon, therapy, swimming, swimming technique and in this video he is sharing his first experience in his first triathlon.

Swimming tips and triathlon tips for your first triathlon:

1. When starting to train for a triathlon, always start with swimming then bike and last start running, it is important to elongate your muscles before shortening them in running.
2. If you are a runner try to swim more hours than running and only after 3 months start biking( if you run 3 hours try to swim at least 4 hours).
3. Start with 3 hours training every week and each week add only one hour, most triathletes start to fast and get injured.
4. Only if possible swim after you run or after the bike in order for your muscles to be balanced and long, even if in the triathlon the order(swim, bike run) is different.
5. First triathlon try to do without a watch just enjoy and feel.
6. Try to smile to the camera every time you see it, it loosens up the muscles, gives energy and looks good on the photos.
7. Less is more: if you feel tired don’t train, listen to your body.
8. know exactly when you are going to eat and drink and try to be like a robot.
9. don’t think about speed try to enjoy the way.
10. Smile smile and smile some more during the way, especially at the end.

Last tip try to do as much sprint triathlon(750 m swim, 20 bike, 5 km run) as you can before you go the a longer distance.
Triathlon is a way of life don’t kill it so fast, only when you shout “I want more now!!!”
Go to the next step.