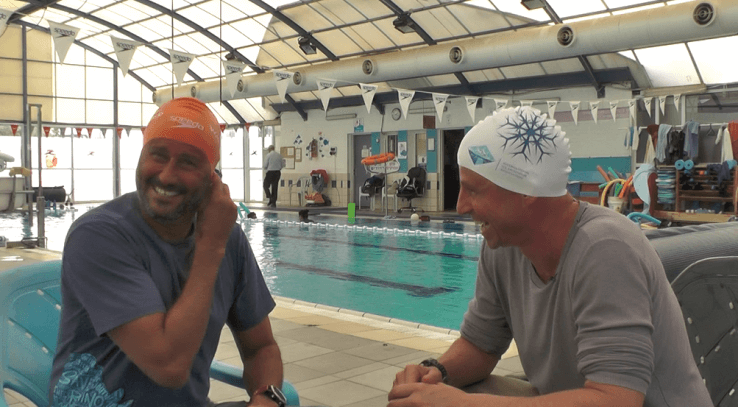 Ram Barkai, , a Guinness record holder, the founder of the Ice Swimming Association and one of the craziest men on earth, talking to Ori Sela about all the things normal people are afraid to ask him.

Ram says that if you are healthy and can swim – anybody can swim 100m through ice.

Cold water became a challenge for Ram in South Africa, where he grew up, where they have cold water all year round. There was a myth that only a few “elite” can swim in cold water, but Ram decided to break the myth.

In 2007 he heard about a trip to Alaska to swim a mile in cold water. It took him a year to organize it.

Ram swims in some pretty extreme temperatures. He says that in Antarctica, where Lynn Cox did her first swim (she was also his inspiration for that swim) he had the coldest temperature – -1 degree.

A funny story is about Ram’s famous picture of diving with his red swimwear that went into the Guinness book of records. It was actually taken on the last day. Ram wanted to have a nice picture of himself diving into the water, but he found out he forgot his speedo, so this is actually his red Israely underwear.

In the second part of the interview Ori Sela asks Ram for some tips for ice swimming.

Ram is relatively skinny for an ice swimmer, so that might limit his distance, but he can take the cold just like people much heavier than him.

Why do people compete?

When you put a challenge to people they will want to push it further, and in the ice it can mean to the death, so it was decided to stop the competitions at a kilometer. There are still hard core people who swim more.

When you do the mile swim, it’s a personal achievement. It doesn’t matter how fast or how well you did it. If you’ve done it, you become an ice member.

In the competitions they sometimes have a professional pool cut into the ice of a frozen lake, and this is probably what they’ll have in Germany in the next big competition in 2017.

Diving is not allowed, or tumble turns. Safety comes first. The rest is freestyle.

Every country has its own ice swimming association with its own logo.

This year there are going to be 11 championships.

How do you go about it if you want to start training for ice swimming?

You have to get used to the ice mentally more than physically, Ram says. If you swim in ice for 5 minutes you will be just fine. Your body won’t go into shock, and you will only have sore fingers.

In South Africa they got tons of ice to a regular swimming pool and managed to reduce the temperature to 7 degrees. Here’ in Israel, you will have to find somewhere high where an outdoor pool can get to 9-12 degrees. Ram doesn’t recommend training in 0 for 0. He also doesn’t recommend spending too much time in ice. You have to learn how to do distances in 10-12 degrees. You need to do ice baths, to learn what the cold does to you. You put your heat under too, but you don’t stay in the bath for more than 10-12 minutes.

Swimming in a lake or the ocean is very different than swimming in a pool, and a lot of people are freaked out by this, but for Ram it’s heaven. He gets bored swimming in a regular pool. The amazing thing is that his body learned how to generate heat so even in winter he can wear a t-shirt and not feel cold.

Ram says he hopes to see an Israeli team in the 2017 competition. He says we have enough crazy swimmers to do it.

Ori Sela: “Ram Barkai is one of the most interesting men I’ve met. He laughs a lot and he likes talking about this unique sport called Ice Swimming, and trying to get more people to participate.

Some people say it’s dangerous to swim in ice, but after talking to Shane Tusup, Katinka Hosszu’s Coach (In the short course European swimming competitions) and hearing Katinka gets in an ice Bath every day in order help muscle recovery and relieve muscle soreness, I am starting to think maybe it’s healthy…”

This is a picture of Ram and this amazing South Africa team in an ice bath, what do you think? Looks as if they are having fun! 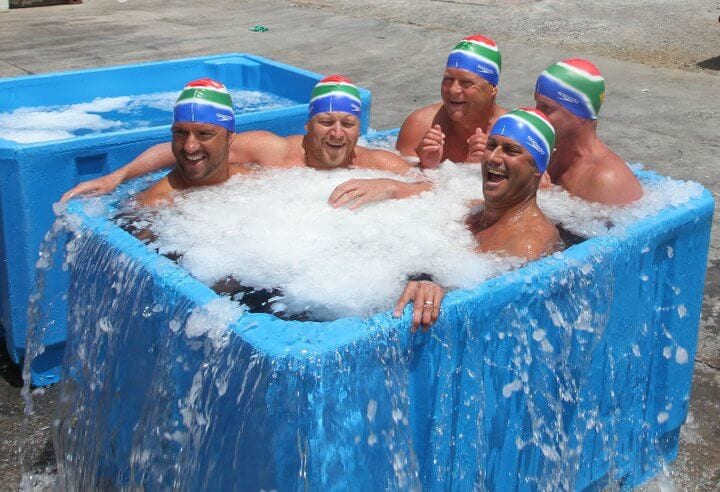